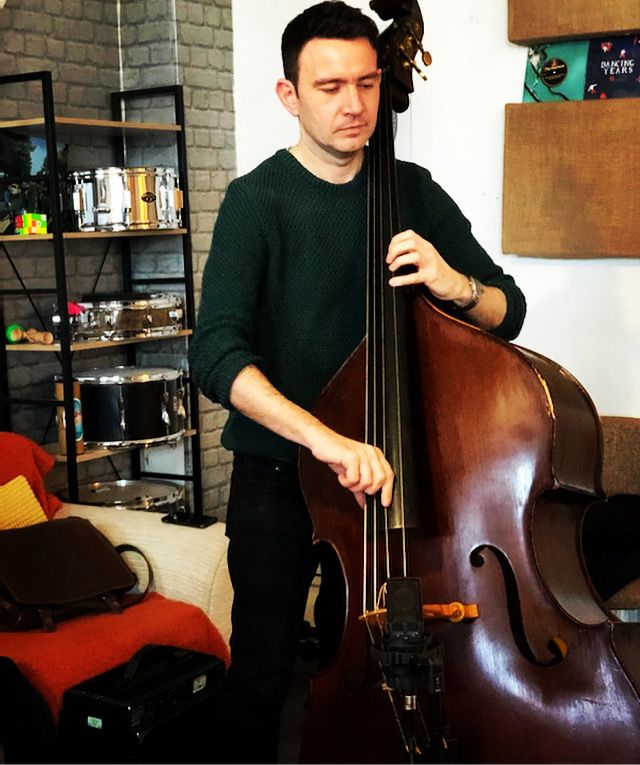 In order to be able to recreate Montgomery’s playing techniques for the recording part of my thesis, I need to spend significant time practicing on the bass guitar and double bass. Instrumental practice always plays a part of my daily life when my work schedule allows. The initial stage of the pandemic allowed me more practice time than I would usually have. This is because live performance completely stopped and my teaching moved online. This reduced the time which I was spending travelling to work. However, this new approach to teaching meant that I also had to spend more time preparing teaching materials such as sheet music and backing tracks.

When the lockdowns came to an end, life became very chaotic. My teaching schedules would be written but then would have to be constantly rearranged due to students isolating, availability of teaching spaces in schools, etc. This resulted in the latter half of 2021 being one of the busiest periods of my working life, leaving me very little time for anything outside of my paid employment. I was working every day of the week with only a few hours to relax on an evening when no live performances were booked in. This led to the difficult but necessary decision to leave one of my teaching posts at a secondary school. I had been at the school for close to 10 years and had been teaching many of the students for several years. Leaving the school has given me two weekday daytimes free to focus on my research and the reduction in admin from having 20 fewer students has given me a better work/life balance.

The materials which I am using for my Ph.D instrumental practice are the Monk Montgomery Electric Bass Method Book and my own transcriptions. I have done some work from the tuition book in the past but it has been broken and disorganised. I have now started working methodically though the book on both the bass guitar and double bass. This is a process which I expect to be completed by the end of February.

There is a significant amount of material in the book including numerous scale exercises, over 100 II V I bass lines to be practiced in all 12 keys, transcriptions of walking bass lines and several bass duets. I have chosen to begin with the II V I lines as I have covered most of the scale exercises in practice in the past. However, I will cover them again using the right hand thumb technique on my 1950’s replica Fender Precision Bass.

Up until this point, I have practiced 19 II V I lines on the bass guitar and 8 on the double bass. The lines are written in the key of Bb but I (as recommended in the book) have played each one in 12 keys, 4 times in each key. This means that each line is played 48 times. The patterns are all walking lines using crotchets. Very few of the lines are diatonic with most making use of the diminished and whole tone scales, tritone substitutions and chromatic enclosures on the dominant chord. This makes transposing the lines into a challenging task but one which I’m sure will have many benefits both inside and outside of my Ph.D study.

On the bass guitar, I have been using my right hand thumb as much as my stamina will allow. Not only is it taking time for the muscular stamina to build, but I also have to build a callous on the pad of my thumb. It is an area of my hand which I have not used to strike the string with any great regularity in the past. To allow the callous some time to heal, I have alternated practice between the bass guitar and double bass. One observation which I have made so far is related to a small change in right hand positioning. Early Fender bass guitars came with a rest underneath the strings where the player could anchor their fingers, allowing them to use a downstroke with the thumb. I have been using this finger rest in practice. Photographic evidence of Montgomery would suggest that he anchored his fingers on the bottom of the instrument. Having tried both positions, I have found that this does alter the tone of the bass slightly and it may be a consideration when delving deeper into the analysis of recordings.

As I practice the lines following the cycle of fourths (a common way to practice in jazz) starting in the key of C, the practice of each line is book-ended by ‘easier’ keys - C, F……D, G. On bass guitar, the keys in the middle are not an issue. Due to the fretted and positional nature of the instrument, there is no great difference when playing in sharp and flat keys. On the double bass, it does become more difficult in the middle section of each II V I line. Playing in ‘closed’ keys for extended periods of time does require greater stamina and attention to intonation. There are fewer opportunities to give the left hand a rest with open strings and to check intonation against the open strings. It is my hope that doing this practice regularly will increase my stamina in these closed keys.

Doing practice in this way has become almost meditative. Playing crotchets for upwards of an hour at a time requires discipline and concentration in order to keep track of where you are musically and where you need to go next. Instead of finding this stressful or demanding, I have found it to be relaxing and almost addictive. The only sense of stress has been physical (the right hand thumb on bass guitar, the left hand on double bass). As well as writing regular updates on my instrumental practice, I will also be recording videos detailing the research where I can demonstrate the various aspects of the work.